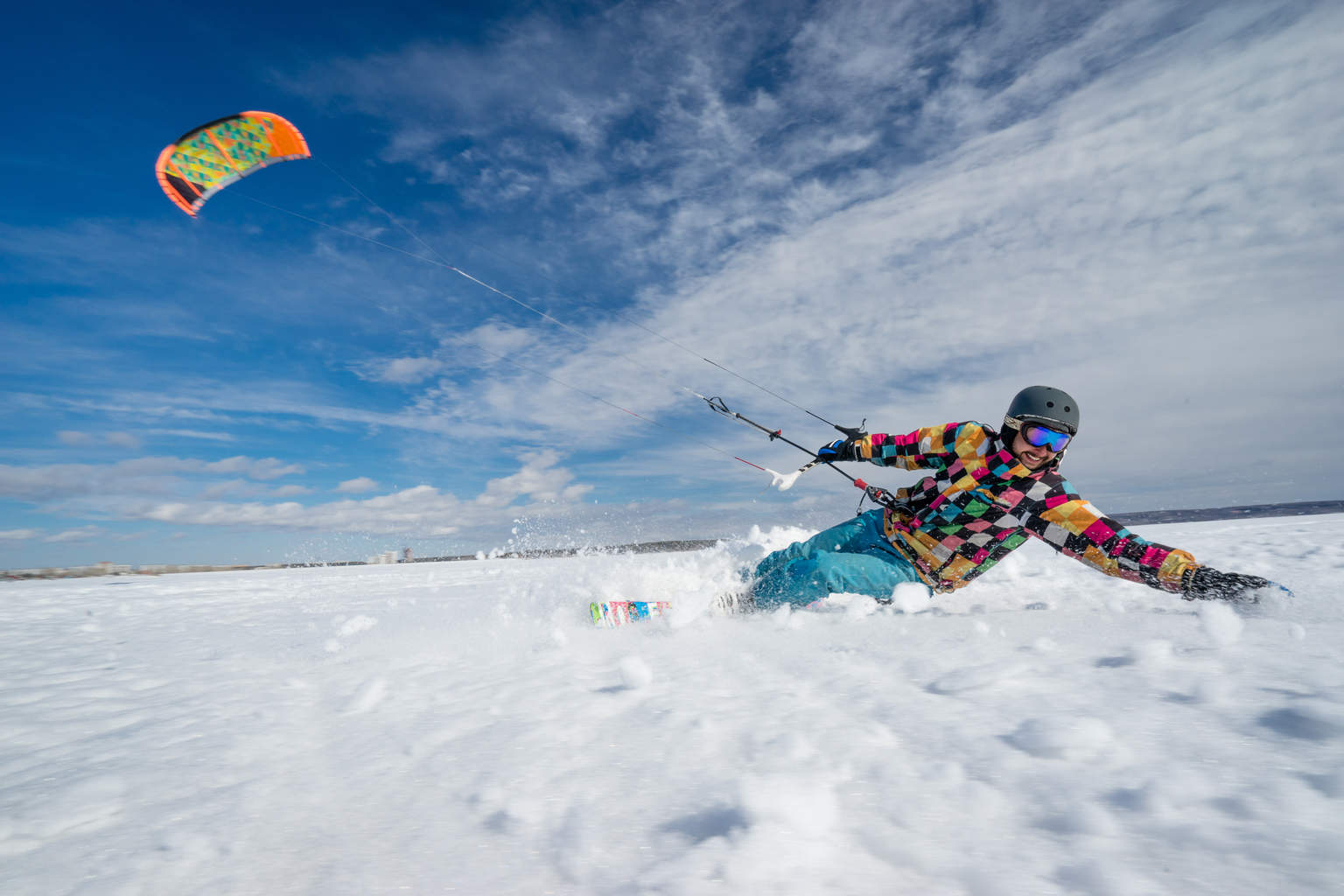 The beauty of using kites for sport lies in their adaptability. Attach yourself to a kite, stand or sit on pretty much anything, add the word ‘kite’ or ‘kiting’ to your whatever you happen to be using and there you go – you’ve got yourself a sport.

Over the last 15 years or so since kitesurfing’s genesis in the islands of Hawaii we’ve seen a few examples of this that have taken off. We’ve had kite-buggying, landkiting, hydrofoil-kiting, stand-up-paddleboard-kiting and a handful of more half baked combinations – though the one area that really took to the addition of a kite was the world of snowsports.

There are two main forms of snowkiting and they predictably correspond to the those two semi-rival groups that occupy the mountains – skiers and snowboarders. The only extras both of these require to turn them from terrestrial mountain sports to trailblazing kite-related madness is simply a kite and a harness. The rest of the kit just comprises of your regular skis or snowboard, plus maybe some additional safety armour. 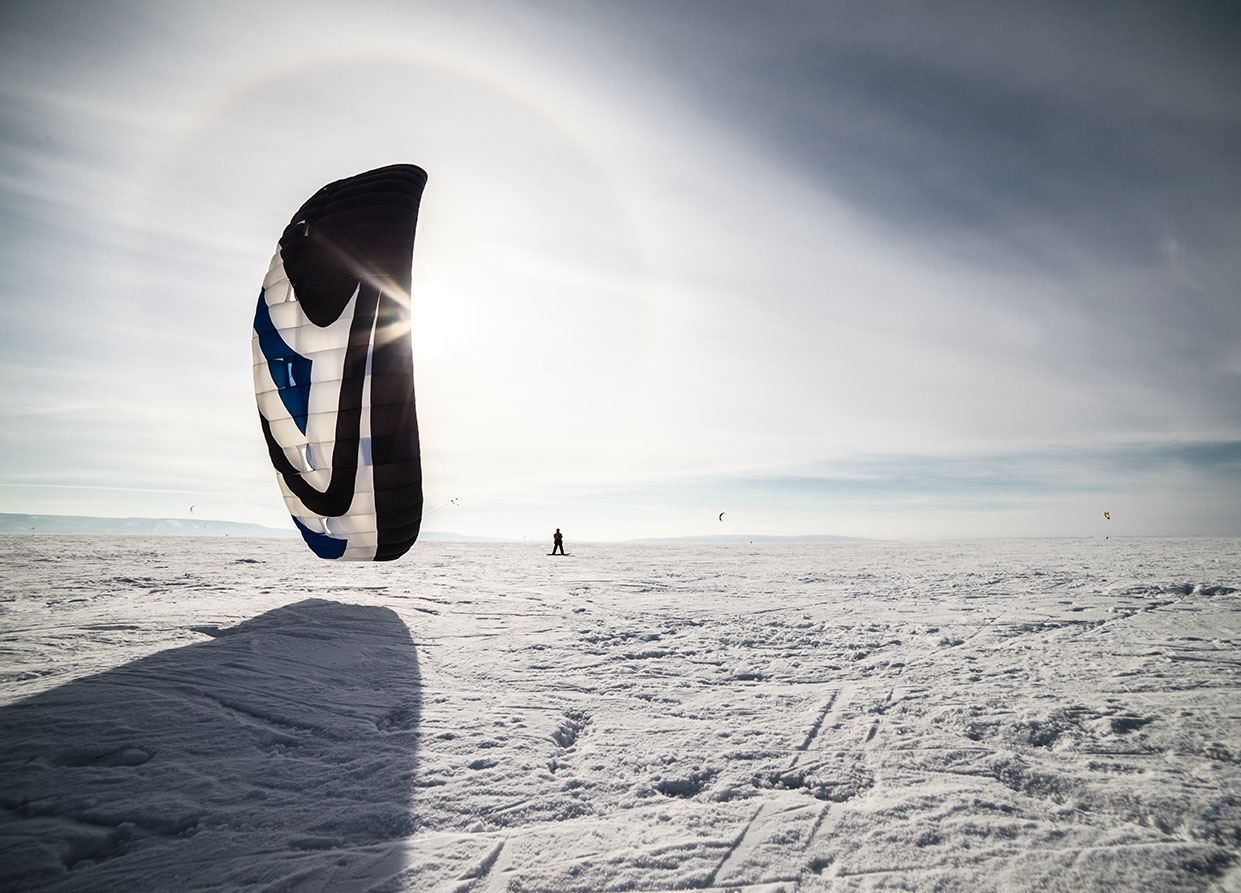 Snowkiting can be practised in virtually any snow covered landscape. From sprawling tundras or icefields that stretch out flat for miles, to generally unexplored areas of mountain ranges that are made accessible via kite – even a large city park on a winter afternoon could make for a viable playground. Suffice to say snowkiting is a remarkably versatile sport.

Originally snowkiters began by using non-inflatable foil kites – foil kites are not generally used for water based kiting as once they hit the water they often lose their shape and are near impossible to get back in the air, though this obviously isn’t an issue on snow. Recently, though, more and more people have used the same kite gear as when heading out to sea.

When learning to snowkite it would be ideal to know both how to kitesurf and also how to ski or snowboard, as the sum of their parts is arguably more difficult than the individual elements.

The kiting is slightly harder on snow for the simple reason that falling is more of an ordeal on hard packed snow or ice than on a nice soft stretch of sea. For the snowboarding aspect of snowkiting the difficulty lies in the dichotomy of firstly being pulled off your edge by the upward lift of the kite, while also being sent too far upwind when you do find your edge – finding that balance is difficult when starting out.

Once you’re up and riding, though, snowkiting offers an astounding level of freedom. Once you’re clipped into your weapon of choice, be it a board or skis, you set off on a nonstop adventure unbound by the usual forces of gravity and the limited length of slopes. 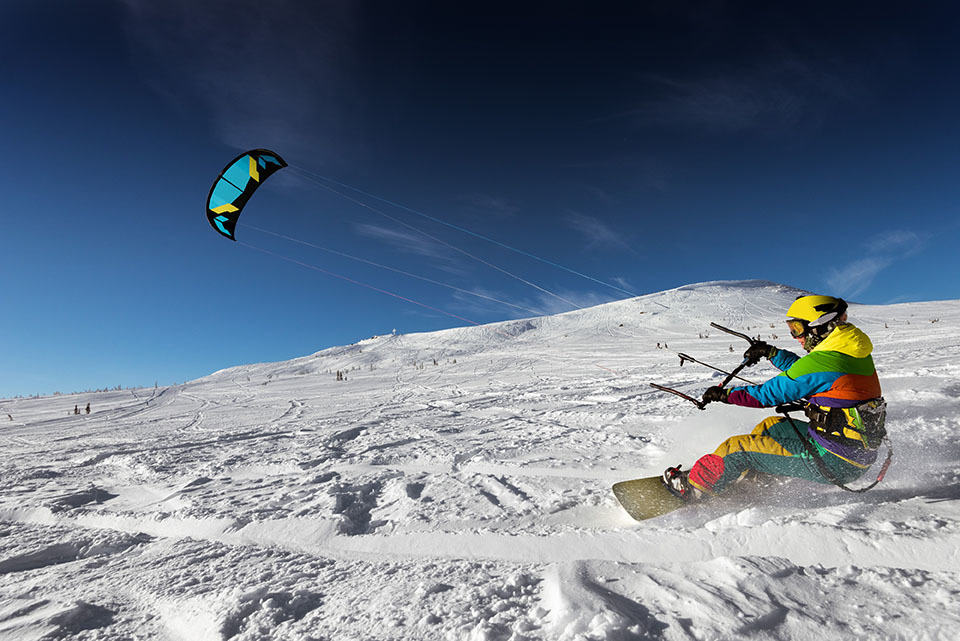 A huge flat powder-filled basin that was once the preserve of snowmobiles and dogsleds is now a veritable playground for skiers and riders alike. While some adventurous types have been known to kite up to the top of a mountain, pack away their kites and go rip down an untapped virgin-powder run.

Snowkiting is going from extreme to extreme as it develops with all the other kite sports. Now there are kiters crossing huge frozen lakes on multi-day excursions, riders jumping off massive cliff edges, there’s big endurance events and course racing – not to mention the levels of freestyle riding that’s being explored at the moment.

As was mentioned before in this article snowkiting can take place in a varied selection of terrains and environments – meaning that there is a whole lot of countries offering great conditions for the sport. There is of course some great snowkiting to be found in the areas classically associated with snowsports – the Alpine region of Europe, New Zealand’s south island, the long stretch of the Rockies – but for the more open minded out there there are some slightly more off the beaten track destinations to be explored.

The endless snowfields of Greenland, the barren wastes of central Russia or the glacial majesty of an Icelandic winter all offer some fantastic snowkiting – and that really is just the beginning. Snowkiting could bring you to a corner of the world that never entered your mind as a possible destination and for that alone, never mind the many other great reasons, I would strongly recommend stepping out and giving this amazing sport a try.